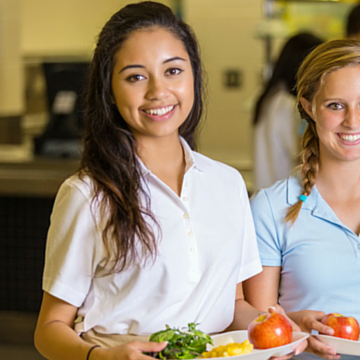 When it comes to building strong, successful kids, we believe that the cafeteria is just as important as the classroom! It just so happens that our friends at Let's Move Salad Bars to Schools tend to agree. Because of this shared belief, we’re increasing children’s access to fresh fruits and vegetables and shaping eating behaviors for a lifetime. Here are just a few reasons why:

Childhood obesity and school nutrition, as well as hunger and food insecurity are just a few issues that the California Giant Foundation focuses charitable efforts towards. Today, the U.S. has more than 38,000,000 primary school children, and according to data from The Center for Disease Control and Prevention:

With statistics like these, we’re doing everything we can to make a difference in schools across America. Through our Tour de Fresh efforts, we’ve raised over $140,000 and placed over 40 salad bars in schools. But we aren’t stopping there. This year, we have a goal to privately finance 100+ salad bars and we are well on our way to reach it. Plus, during this back-to-school season, we’ll be donating a salad bar to the school that receives the most votes between August 19 – September 20. Yep, you read that right! You could win a salad bar for YOUR school just by voting! The winning school will also receive a shipment of farm-fresh California Giant berries to celebrate!

Make a difference in a school near you and vote now!

A lot of people ask about "the person behind the posts" on The Buzz. Who is THAT knowledgeable about all things berry-related?