Leaves are changing color, flannel is making a comeback and sandals are being traded in for cute booties. Fall is in the air and I promise there’s nothing better than waking up to a warm cup of coffee and a huge bowl of oatmeal on a crisp autumn morning! I love watching fall leaves swirl around while I start my day by loading up with a delicious bowl of golden oatmeal topped with cinnamon sugar berries.

This dish is seriously an explosion of flavor. I eat oatmeal throughout the year, but I love getting creative with this dish during cooler months. I’ve always been a honey girl but I substituted maple syrup this morning and I’m completely obsessed. The combination of maple, cinnamon and turmeric is unreal, and the cinnamon sugar berries are the perfect topping to this golden dish. 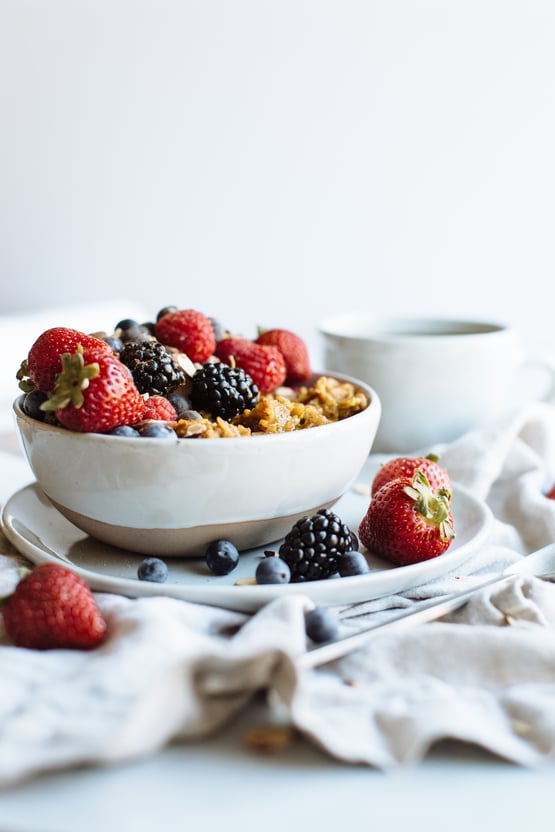 You can mix any and all of your berries in the cinnamon sugar mix. I personally love combining strawberries, blueberries, blackberries and raspberries for my perfect oatmeal. For my next bowl, I think I’m going to add walnuts and almonds for an added crunch. Enjoy this maple infused ooey gooey golden oatmeal with sweet cinnamon sugar berries as the perfect start to your fall day!

For the oatmeal:
For the berry topping: