Whether your family celebrates Thanksgiving breakfast or Thanksgiving dinner – this bread pudding is a holiday must!

As a young married couple, everyone wants to see us during the holidays, and it’s hard to manage our time between two families. Fortunately, my parents and my in-laws live less than four hours from each other. We are able to spend Thanksgiving morning with my in-laws and Thanksgiving evening with my parents. We don’t like arriving empty handed to either event so we've found the perfect treat to enjoy in both the morning and the evening.

This blackberry and white chocolate bread pudding has quickly become our signature dish. I must admit, these ooey gooey delights take a long time to prepare but we've learned a secret I have to share with you! You can prepare this holiday treat the night before and heat it up right before it's time to eat. My husband discovered this secret a few years ago because he was tired of waking up at 5:00 AM on Thanksgiving morning - yuck! Now, we spend the evening before Thanksgiving preparing our bread puddings to ensure we have a little time to ourselves before the festivities begin.

With the excitement of the busiest cooking day of the year, we've learned that preparing our food the night before is the best way to enjoy the holiday. Enjoy this scrumptious blackberry bread pudding and have a Happy Thanksgiving! 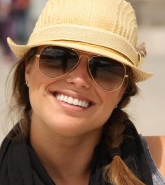 Some might call our salesperson by day/food blogger by night, Kristin, "eclectic," and they'd be right on.